As Christians we should look toward the image of the crucifixion as the most perfect example of the sacrificial love from which to learn. It is, as St. Maximillian Kolbe says, “the school of love.”

But this example of true, self-gift extends beyond Christ on the cross, and looks out toward his most Blessed Mother standing at his feet as he takes his final breaths. To me, this image exemplifies a beautiful and necessary facet of human love.

Mary did not let her son suffer alone; instead, she stood close enough to him during his final moments that his most precious blood probably showered down upon her. However, Mary did not stand as a mere observer of her son’s passion. Rather, because of her deep love for Jesus, Mary became a partaker in his passion. She allowed his sorrow to pierce her heart.

When you willingly choose to share in someone else’s cross, sympathy grows into empathy, and your capacity for intimacy with another deepens.

Everyone enters a relationship with some kind of baggage, with wounds that need healing. My husband and I are no exceptions.

When we got married, I had no idea how much the cross my husband carried of his mother’s alcoholism and mental illness would affect me. It is a cross that has brought him a lot of pain throughout his life; fear of abandonment or feelings of being unlovable have reared their ugly heads more than once. And it’s been difficult for me, not only watching the effects her words and actions can have on him, but also learning how to navigate this tricky new relationship I’ve married into. Encountering this cross has unleashed a flood of different emotions within my heart — sorrow, anger, unrest.

Often when I see my husband in the midst of his passion, I want to make it stop. I try to do everything in my power to fix the problem at hand. Instead of entering into his suffering like Mary did with Jesus, I simply try to dispose of the cross, but in doing so, I would also inadvertently rid ourselves of all of the grace suffering brings.

One night, in the midst of a particularly challenging time for my mother-in-law and my husband, my mind raced trying to figure out what I could do to make it all better. I threw out unhelpful (and probably insensitive) advice and waited for something to stick. That is until my husband looked me in the eyes and said: “I don’t need you to fix it, I just need you to be here with me.” And for once, instead of pushing forward with what I thought was best, I stopped talking. I sat down with him on our couch and put my arm around him. I held him close letting his tears soak the shoulder of my sweater. And I finally understood what Mary must have felt from the foot of the cross.

Mary and Jesus’ hearts were so closely connected and so united in love, one might say that two hearts were crucified on that Good Friday. She did what the disciples in the Garden the night before could not do — stay with Christ in his hour of need.

Although it was not her body that was bruised and broken, Mary felt the nails that pierced his hands and the thorns that bore into his head. She felt the sting of the scourges and of the humiliation he endured as he hung naked for all to see. Mary was able to enter so fully into the suffering of her son, that she was also able to become a vital part in his salvific work and resurrection.

Similarly, entering into the sorrow of another person, especially in the moments where it is the most difficult to do so, can bring about new life and a deeper love in your relationship. Allowing your heart to be touched or even broken by another’s suffering can not only bring you closer together, but can also help your heart more resemble the heart of Christ, ready and willing to lay itself down for the sake of the beloved. 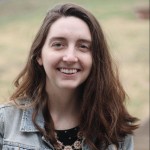 Carissa Pluta is a wife of a FOCUS missionary, mother of two, and a freelance writer + blogger currently living outside of Philadelphia. She has a deep desire to cultivate beauty in all that she does and can often be found listening to Paul Simon on vinyl, reading a book, and drinking copious amounts of tea. You can learn more about her on her blog at TheMythRetold.com